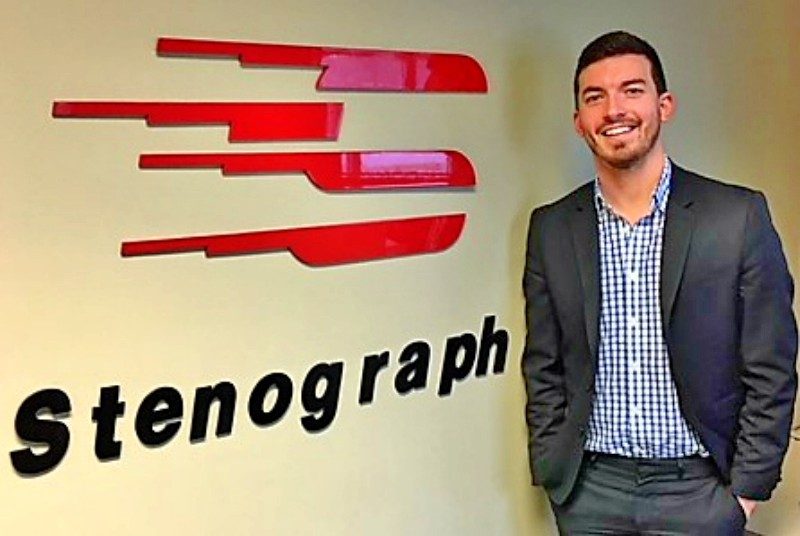 Isaiah Roberts is a fast-rising star in the court reporting world, but that’s no surprise to anyone who knows him. Truth is, a trajectory of this nature is not exactly new territory for the 23-year-old from Magnolia, Ill. But spend a few minutes with the youngest graduate in the history of Illinois State University (he did it when he was 19), and you’d be hard-pressed to detect any kind of an ego.

He’s young, but not foolish. He’s eager, but not brash. He aspires to be great, but he’s not out of touch with reality. He’s also just a normal guy with friends and interests like any other person in their early 20s.

Professionally, Roberts is doing what he loves, although becoming a court reporter wasn’t in his plans from the beginning. It was always about law school — going the route of the lawyer — but before long, something clicked.

“Well, first, law school was just so expensive,” Roberts said when he visited the Stenograph home office in Elmhurst, Ill., in mid-November to speak to a group of high school students who expressed interest in the field. “And when I looked at it, I started to see the oversaturation of new lawyers and decided I wanted to do something different.”

That decision was perhaps made a little easier thanks to Roberts’ mother Susan, a court reporter for nearly four decades. Isaiah Roberts knew he wanted to stay within the law realm, and becoming a reporter himself would allow him to do so without being just another lawyer — another number — lost in a sea of thousands of others cranked out by universities every year.

After graduating from his Houston-based court reporting school, Roberts is now an official court reporter at the McLean County Law and Justice Center in Bloomington, Ill. He enjoys the variety that comes with the role, and he’s confident in the health of the industry despite persistent questioning from friends who ask if he’s worried technology will make him obsolete.

“I hear it a lot from my friends who don’t really understand what I do,” Roberts said. “I don’t believe we’ll be replaced anytime soon. There’s just so much more to it than being able to pick up audio.”

And while Roberts admits the industry is evolving, it’s those nuances he alludes to that separate a real-life court reporter from a robot.

“There’s the squeaky chair, or someone coughs, or a witness has a thick accent. Even if you had (an automated) system that could transcribe all of that, I don’t believe it would be accurate enough,” Roberts said. “And then there’s the whole other issue of knowing what’s on the record and what isn’t. There are so many elements involved, you can’t replicate a court reporter, even with perfect audio recording.”

“Honestly, I think the biggest problem is that there aren’t enough people pursuing this as a career,” Roberts said. “Either people don’t realize it even exists, or they think it sounds boring.”

Roberts discussed several open positions he’s heard of going unfilled for quite some time, including positions in McLean County where he works.

“We’ve had listings out there for a long time,” Roberts said. “We haven’t had one person apply in seven months.”

That’s troublesome to Roberts, but he said he’s seeing growth on the captioning side of the fence and believes the industry is recognizing the need to update its messaging about court reporting as a career.

He’ll continue to carry the flag for court reporting as well, but he does have goals for his own professional development. Eventually, Roberts wants to work in Washington, D.C., as an official Congressional stenographer. Before that, however, he might set his sights on something a bit more sporting.

“Oh, yes,” Roberts said with a grin and slightly squinted eyes that suggest he’s already deep into his preparation. “I want to be a speed champion.”