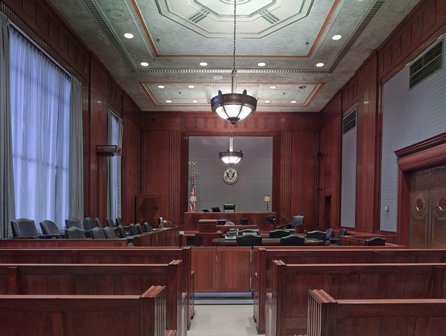 2020 being the year that it is, I should probably have expected to receive a summons for jury duty, however it was quite a shock to receive the form in my mailbox, and an even bigger surprise to learn that I was expected to report in just a couple of weeks. Delays in the delivery of US mail affected the speed at which the summons got to me; given some of the other mail delays I’ve experienced out here in “middle of nowhere-adjacent,” it’s probably just a matter of luck that the summons arrived before the report date!

As I’ve already been called nine times before, once when I lived in the Chicago area, and eight times during my 29-year sojourn in Los Angeles, and because I’d already served on four different juries, I thought I had a clear idea of what to expect. I figured I’d be able to call someone or go to a website and postpone service for a while, to a time that was a bit more convenient vs. the date they chose, which was right in the middle of my preparations for launching Ascend Training by Stenograph.

I wasn’t thrilled with the idea of having to participate in this process during a pandemic. Sure, I have a mask and hand sanitizer and I can bring my own food and beverages, but I’ve discovered that trying to stay at least six feet away from people who don’t have the same commitment to staying healthy as I do is not always easy! Although I thought about how the pandemic would affect me and/or other jurors and the court in terms of how they’d cope with keeping people safe from COVID while operating, I really hadn’t considered how COVID-19 would affect the procedures of jury acquisition, especially in a small rural county. My past experiences of jury duty occurred when I was living in major cities, in counties with large populations. In a county with several million people who are eligible for service, it’s a little easier to make accommodations for people who have reasons why they can’t serve. However, the rural county I live in now has fewer citizens than most Chicago or Los Angeles “suburbs.” I discovered that rescheduling via the internet or by mail was not permitted and unless you were currently quarantined because you had symptoms or had been in contact with someone who had COVID-19, or were in a high risk group, or if you were living with someone in a high risk group and could get a physician’s note to prove it, you were not going to be permitted to postpone service! Well, I’m healthy and so is my husband and although we’re members of AARP, we’re not old enough just yet to be considered at high risk based on age, so I had no honorable choice other than to follow the instructions and begin calling in to see if they needed me to report for service.

I was asked to call in on Sunday, August 9th to determine whether to report on Monday the 10th. I was delighted when the recording told me to call back on Monday afternoon after 5:30 p.m. and hoped that experience would be repeated throughout the week and I wouldn’t be needed; that happened to me a couple of times in Los Angeles. But this is 2020, and I’m in a rural county so of course, that luck did not hold. On Wednesday afternoon, I was told to report on Thursday morning.

I made the 30-mile drive from my home to the courthouse, parked (for free, in the courthouse parking lot right next to the building: that was a change from my experiences in Chicago and Los Angeles!) and walked over to the front of the courthouse. I was immediately reassured that adequate safety precautions were being taken. There were markers showing people where to stand while lining up to get into the building designed to ensure that people maintained safe distances. At the front of the line was an officer with a box of masks. If anyone showed up without one, she handed a mask to them. Unfortunately, she was not armed with a temperature gun; they relied entirely upon the honor system when inquiring of each person as they got to the front of the line: do you have a fever? Do you have any symptoms such as sneezing, coughing, trouble breathing, or chest pain? Have you been in contact with anyone who has been diagnosed with the coronavirus? Each person answered no, and were allowed in, one at a time. I found out later that they had purposely assigned staggered arrival times to various groups of people via different call-in numbers to ensure that the line never got too long, so long as people arrived on time and not too early! I appreciated that they’d thought ahead about that because the temperature was 104 degrees Fahrenheit (40 degrees Celsius) when I arrived!

After entering the building, each person went through the metal detector, one at a time. The security officers were separated from the public with a plexiglass barrier. The officers were very polite, and all wore masks and gloves, and re-gloved after touching anything.

There were a couple of court staff persons assisting with new juror check in at the jury assembly room which went smoothly. There were pens in a box marked “clean” and an empty box next to it labeled “used.” The chairs in the room were positioned about eight feet apart throughout the room and tape marks showed their proper position on the floor. Orientation began promptly when they said it would (another improvement over my experiences in Cook County and Los Angeles County!) and consisted of a quick summary of the details about what constituted a legitimate reason to be dismissed for hardship and what excuses would not be considered acceptable; and a review of COVID-related procedures. For example, no more than two jurors at a time were permitted to leave the jury assembly room and use a bathroom. When anyone left the room, their unoccupied chairs were immediately sanitized if a staff member was available, to ensure that if people did not return to the same chair, that no one would be at risk.

The first panel was called about an hour after orientation. They called four people at a time. (In L.A. and Chicago, the panels were typically at least 60 people at a time.) When I was called, they took 12 of us at the same time to “the big courtroom” on the second floor. Before we were allowed to leave, we were asked whether anyone required an elevator to get to the second floor, because no more than three people were allowed in an elevator at any time. Those of us who could manage stairs lined up at six-foot intervals and then followed a deputy like ducklings to the doors of the courtroom. When they opened the doors, they allowed us into the courtroom one at a time and directed to specific seats. Again, caution was taken to ensure that people didn’t walk too closely together at any time. I was Prospective Juror #3 on the panel, and I and the two others ahead of me were seated in the jury box, with four seats between each of us. The other nine were asked to sit in specific spots marked with blue painter’s tape on the observer’s “pews” in the back of the courtroom.

The judge introduced himself, gave a two-minute version about the importance of jury duty, then had each of the attorneys introduce themselves, and the public defender introduced her client, the defendant. The judge alerted us that this was a criminal case and that he expected it to take about ten days, which, because the judge only had Tuesdays, Wednesdays, and Thursdays available for trials, could take up to four weeks to actually complete. We were asked if we recalled the instructions about legitimate hardships and asked if any of us had those to declare. Those that did were told to remain, those that did not were sent back to the jury assembly room to fill out a 15-page questionnaire.

I was in the courtroom for such a short time I barely got a look at the reporter! He was young, very well dressed, and very clearly writing realtime for at least himself (I didn’t see anyone else in the courtroom with a screen in front of them). Unfortunately, I didn’t get a chance to see which writer he was using because he had it underneath his desk, hidden from my line of site.

It took about an hour to fill out the questionnaire, and then I was excused for the day. I was told that I’d have to report back the following Monday, but to call in to confirm, as complications from the virus caused the schedule to change frequently. For example, in another case, a defendant was supposed to be brought over from the local jail, but then there was an outbreak at the jail and so all trials and procedures involving prisoners were suspended for what turned out to be two months! I’m glad I had that information because on the night before I was supposed to report, I was told not to report until Tuesday. Then on Monday night I was told not to report on Tuesday and to call in again for further instructions… not even that I should expect to report on Wednesday.

Fortunately for me and my schedule, either the prosecution or the defense decided on the basis of my questionnaire that I was not considered to be good juror material for this case, and I got a call from the clerk that I had been excused from service, and that they would mail me proof of my “one day” of service. From start to finish, it was eight days of not knowing what was happening next and adjusting plans to be able to work around jury duty!