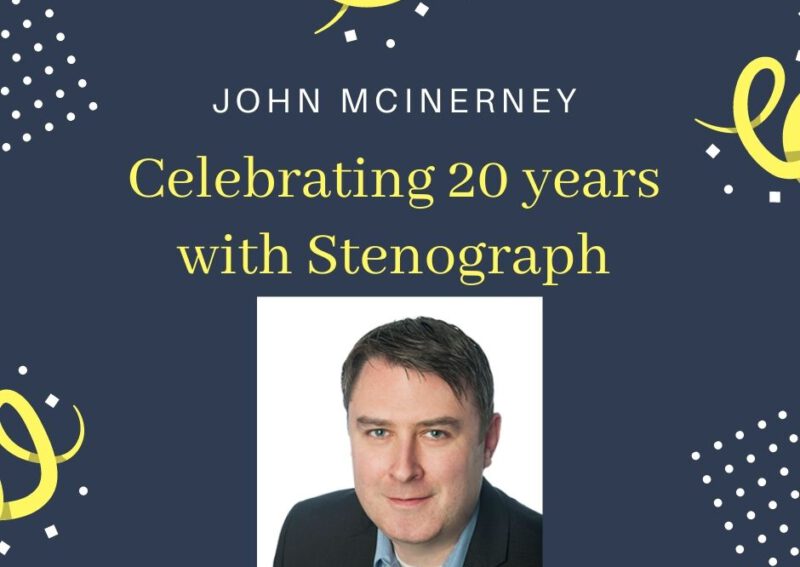 This month our VP of Operations, John McInerney, is celebrating 20 years with Stenograph. John shares memories from his early days, and explains why he loves working at Stenograph. Happy anniversary, John!

I started at Stenograph in the summer of 2001. It’s fun to think about how things were different back then. Air travel sure was a lot easier. Working as a technical support representative was my first job out of college after graduating from Eastern Illinois University. To say I knew little about the industry would be an understatement. I was quickly trained on the Stentura family of machines. Fanning paper, reseating the ribbon, wiping down the paper tray with a dryer sheet, and lubricating the bearings will forever be engrained in my head. And how could I ever forget hooking up a USB to serial adapter.

Back then CATalyst backed up to floppy disks (3.5 inch) and Windows ME was going to be the next big thing. The parallel port interface had two openings on it, and I hoped the customer on the other end of the phone still had the button inside one of the openings. Those were the most unpleasant of phone calls. Many calls throughout the day though were rewarding. Helping someone out with a problem and reaching a resolution is what makes the job fun.

Since I began work here the address and building has changed three times. The hardware and technology that we work with has changed many times over. What used to be piles of paper or folders, now exist in the cloud. Wires have been replaced with Bluetooth and Wifi. Hair that was once brown is now this odd gray color. But one thing that has remained consistent are the people at Stenograph.

’ve worked with many people in my 20 years at Stenograph. This includes my wife, who I meet while she worked at Stenograph in 2004. Although she and others have left to pursue other ventures, many others have remained. It really is the people here that makes this place special. When I interview candidates and they ask “why have you stayed here so long,” the first talking point I mention are the people that I work with.

Technology will continue to change and new features will be developed for software, but one thing will not change, our teams dedication to maintain Stenograph as the leader in our industry.